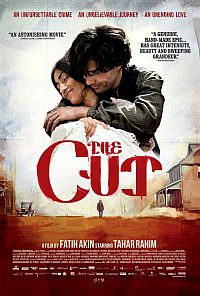 Description:
The Cut is a 2014 internationally co-produced drama film directed by Fatih Akın. It was selected to compete for the Golden Lion at the 71st Venice International Film Festival. The film is about the life and experiences of a young Armenian by the name of Nazareth Manoogian against the backdrop of the Armenian genocide and its repercussions in different parts of the world.

Available from:
The Cut can be purchased or rented through Amazon: https://www.amazon.com/Cut-Tahar-Rahim/dp/B01AQPBIJU