They Can Live in the Desert but Nowhere Else: A History of the Armenian Genocide 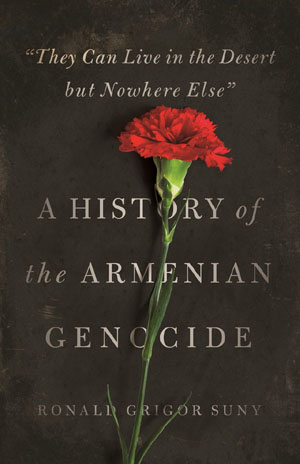 They Can Live in the Desert but Nowhere Else: A History of the Armenian Genocide

"The only weapon against bad history deployed for political or personal vindication is scrupulous investigation that results in evidence-based narration and analysis of what it is possible to know."

Description:
As it lost territory during the war, the Ottoman Empire was becoming a more homogenous Turkic-Muslim state, but it still contained large non-Muslim communities, including the Christian Armenians. The Young Turk leaders of the empire believed that the Armenians were internal enemies secretly allied to Russia and plotting to win an independent state. Suny shows that the great majority of Armenians were in truth loyal subjects who wanted to remain in the empire. But the Young Turks, steeped in imperial anxiety and anti-Armenian bias, became convinced that the survival of the state depended on the elimination of the Armenians. Suny is the first to explore the psychological factors as well as the international and domestic events that helped lead to genocide.