Roots of Evil: The Origins of Genocide and Other Group Violence 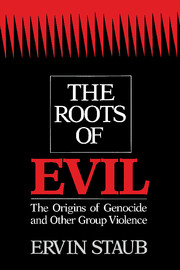 Roots of Evil: The Origins of Genocide and Other Group Violence

"Germany was the only nation in a position to exert influence on Turkey, but the German government never responded to invitations by the United States and other governments to cooperate in efforts to end the genocide."

Description:
Ervin Staub asks in The Roots of Evil, how can human beings kill or brutalize multitudes of other human beings? Focusing particularly on genocide, but also on other forms of mass killing, torture, and war, Staub explores the psychological, cultural, and societal roots of group aggression. He sketches a conceptual framework for the many influences on one group's desire to harm another: cultural and social patterns predisposing to violence, historical circumstances resulting in persistent life problems, and needs and modes of adaptation arising from the interaction of these influences. Such notions as cultural stereotyping and devaluation, societal self-concept, moral exclusion, the need for connection, authority orientation, personal and group goals, "better world" ideologies, justification, and moral equilibrium find a place in his analysis, and he addresses the relevant evidence from the behavioral sciences. Within this conceptual framework, Staub then considers the behavior of perpetrators and bystanders in four historical situations: the Holocaust (his primary example), the genocide of Armenians in Turkey, the "autogenocide" in Cambodia, and the "disappearances" in Argentina. Throughout, he is concerned with the roots of caring and the psychology of heroic helpers. In his concluding chapters, he reflects on the socialization of children at home and in schools, and on the societal practices and processes that facilitate the development of caring persons, and of care and cooperation among groups.