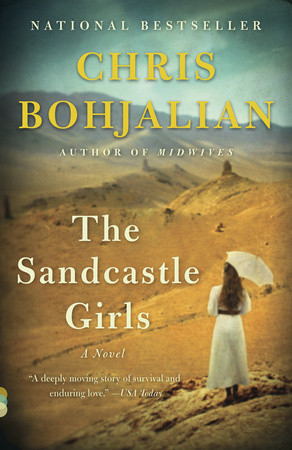 "She recalls what little she can of the day the German engineers had taken her picture. The rough wall of the building against which they had posed her, the scabrous stone against her spine. The patch of shade in which she collapsed. Her throat was too raw to speak above a whisper and her feet were imbrued with the miles and miles she had walked: they were swollen, awash in lesions and cuts, the smaller bones chipped and cracked. But the Germans were sympathetic and good-natured, and she felt that by leaving behind an image of her suffering she would give her death meaning. Not much. But some. Someone someday might see her emaciation and degradation and realize what the Turks had done in the desert."

Description:
The Sandcastle Girls is a spellbinding tale that travels between Aleppo, Syria, in 1915 and Bronxville, New York, in 2012, a sweeping historical love story steeped in the author's Armenian heritage. It begins with its protagonist, Elizabeth Endicott, a Mount Holyoke College graduate, volunteering on the behalf of the Boston-based Friends of Armenia to deliver food and medical aid to refugees from the Armenian Genocide and ends two generations later when a novelist embarks on another journey through her family's hsitory that reveals love, loss, and a wrenching secret that has been buried for generations.