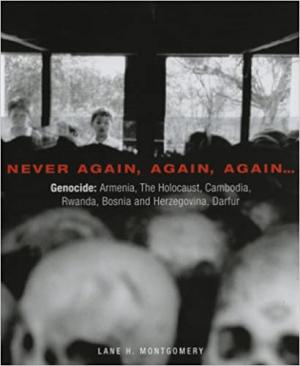 "In fact, more genocide has taken place within our lifetime than at any other time in world history, and much of it happened while we looked on or refused to act."

Description:
Never Again, Again, Again...is a powerful photographic essay with text on six major genocides that have taken place in the 20th and 21st centuries: Armenia, the Holocaust, Cambodia, Rwanda, Bosnia and Herzegovina, and Darfur. It is the fitst photographic publication dealing all six genocide, including photographs by the author, other contemporary photographers and archival images. The photographs are accompanied by text from scholars and leading activists for human rights, as well as by excerpted text from authors familiar with the regions and those who have experienced the horror.