Children of Armenia: A Forgotten Genocide and the Century-Long Struggle for Justice 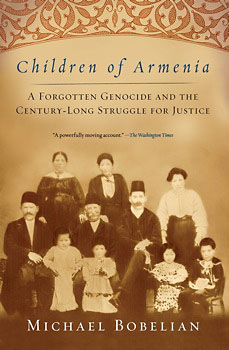 Children of Armenia: A Forgotten Genocide and the Century-Long Struggle for Justice

"President Herbert Hoover wrote in his memoirs that "Probably Armenia was known to the American school child in 1919 only a littel less than England." That was no longer true in 1965. One of the most well known human rights dissters of the twentieth century had practically disappeared from the world's consciousness by its fiftieth anniversay."

Description:
At the close of World War I, the upsurge of support for the survivors of the Armenian Genocide, considered one of the world's first international human rights movemements, inspired the few remaining Armenian leaders to seek relief and justice for their people. But despite their tireless efforts, the promises made to them by the war's victors were systematically cast aside durng postwar negotiations. In the end, the Armenian received nothing, not even an apology, and decades of silence would pass before the surviviors, dispersed and on the verge of extinction, would produce a new generation of activists who would renew their fight for justice. Children of Armenia is a groundbreaking account of the Armenian struggle to seek redress in the face of recalcitrant perpetrators and an indifferent world.