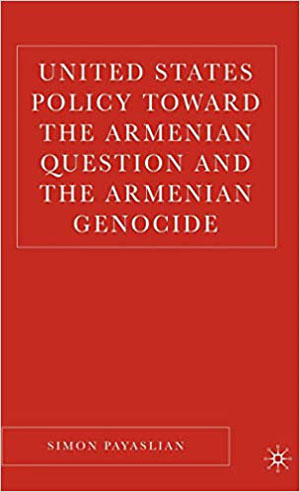 "Payaslian's book provides the most comprehensive study of U.S. policy toward the Armenian Genocide during World War I. He shows how America's response was affected by long-standing missionary connections, geopolitical influences, and economic interests, including oil. All these factors come together in Payaslian's first-rate book, making it a major contribution to historical scholarship."

Description:
This comprehensive analysis of American policy toward the Armenian Question and the Armenian Genocide focuses on the important role big business played in keeping the United States from more actively opposing the genocide, despite broad public opinion calling for greater action. It surveys the historical evolution of U.S. policy toward the Ottoman Empire since the early nineteenth century and examines the extent to which the missionary community, commercial interests, and international economic and geopolitical competitions shaped U.S. policy during the administrations of McKinley, Theodore Roosevelt, Taft, and Wilson.